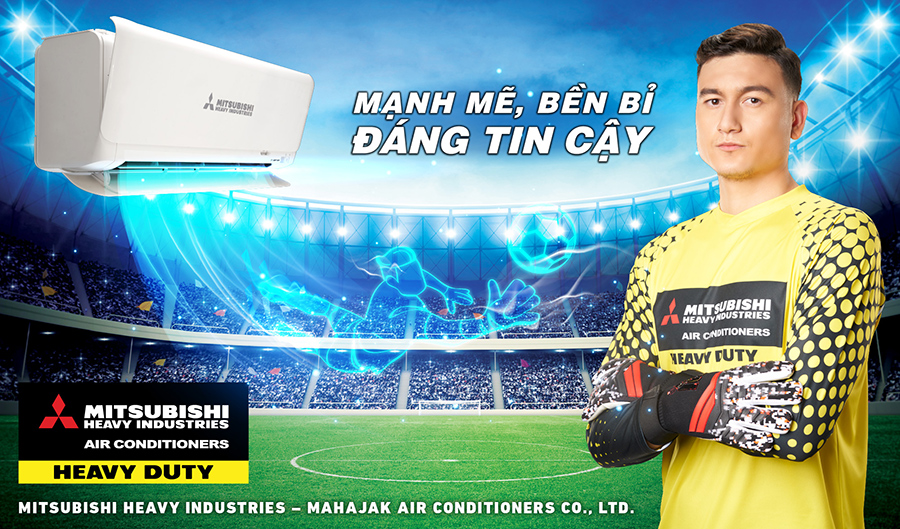 Tokyo, March 19, 2020 - Mitsubishi Heavy Industries Thermal Systems, Ltd. (MHI Thermal Systems), a 100% subsidiary of Mitsubishi Heavy Industries Group, is launching an initiative to boost sales in Vietnam's air-conditioner market, a move responding to expanding demand fueled by the country's stable economic growth. To begin, in March the company will commence marketing of advanced models for inverter-type residential air conditioners, a segment in which demand growth is progressing on major scale. Simultaneously, a campaign will be introduced to build up MHI's brand image in Vietnam, for example by featuring one of the country's most famous soccer player as a brand ambassador for MHI air conditioners.
The newly launching inverter-type air conditioners for residential use are MHI Thermal Systems' "YXP Series," offered in four models. All units have achieved to maintain the same levels of energy efficiency as existing models and thus costs have been compressed in order to enable local users to purchase the inverter-type systems at modest prices. All models feature the environmentally harmonious R32 refrigerant. Market launch will take action progressively across the country starting from March. Demand for inverter-type residential-use air conditioners is currently increasing in Vietnam, and as of 2017 such units have come to account for over 50% of all residential-use air conditioners sold. In an inverter-type model, the speed of the motor inside the air conditioner's built-in compressor is optimally controlled, enabling waste-free temperature adjustment and energy-saving operation. MHI Thermal Systems will gradually expand its lineup of inverter units in line with Vietnam's growing demand for comfort combined with energy efficiency.

To promote sales, MHI Thermal Systems has appointed Dang Van Lam, one of Vietnam's leading soccer players, to serve as a brand ambassador. Van Lam, who plays as goalkeeper for the national soccer team, is known for his power, endurance and reliability - attributes that go hand-in-hand with the brand image of MHI's "HEAVY DUTY" air conditioners being promoted in the Asian markets. He will appear in the company's local TV commercials and other advertising media.

MHI Thermal Systems manufactures and markets air conditioners for residential and commercial uses in neighboring Thailand. Operations there are carried out by Mitsubishi Heavy Industries - Mahajak Air Conditioners Co., Ltd. (MACO), a joint venture with a local partner. In 2017, MACO completed expansion of its components production plant and construction of a new electrical equipment factory. The company is currently working to expand its production structure, and it will play a central role in developing the new market in Vietnam.

The rapid growth of Vietnam's economy, including its air-conditioner market, comes on the back of industrialization driven by both domestic and foreign investments. During the six years term from 2013 to 2018, Vietnam's residential air-conditioner market doubled in scale to more than 2 million units, and annual growth is projected to hold at a high rate between 8 and 10%. It is in response to this robust growth potential that MHI Thermal Systems has decided to ramp up its marketing in the country.

The overseas air-conditioner market has become increasingly competitive, mainly as a result of maturation of Japan's domestic market and an increase in overseas manufacturers. Nevertheless, market scale itself is expected to expand amid increasing demand worldwide for units offering greater energy efficiency and the trend toward adoption of air conditioners for comfort. Vietnam is one such promising market, and MHI Thermal Systems, through proactive marketing investments, will pursue a position of competitive superiority in the global market while simultaneously contributing to global environmental protection.